Understanding the performance overhead of encryption and it's upside

Every modern application has a requirement for encrypting certain amounts of data. The traditional approach has been either relying on some sort of transparent encryption (using something like encryption at rest capabilities in the storage, or column/field level encryption in database systems). While this clearly minimizes the requirement for encryption within the application, it doesn’t secure the data from attacks like a SQL Injection, or someone just dumping data since their account had excessive privileges, or though exposure of backups.

In comes the requirement of doing encryption at the application level, with of course the expected complexity of doing a right implementation at the code level (choosing the right cyphers, encryption keys, securing the objects), and securing and maintaining the actual encryption keys, which more often than not, end in version control, or in some kind of object store subject to the usual issues.

Traditionally, there has been different approaches to secure encryption keys: An HSM could be used, with considerable performance penalty. An external encryption system, like Amazon’s KMS, or Azure Key Vault, or Google KMS’s, where the third party holds your encryption key. Ultimately, HashiCorp’s Vault offers it’s own Transit backend, which allows (depending on policy) to offload encryption/decryption/hmac workflows, as well as signing and verification, abstracting the complexity around maintaining encryption keys, and allowing users and organizations to retain control over them inside Vault’s cryptographic barrier. As a brief summary of Vault’s capabilities, when it comes to encryption as a service, we can just refer to Vault’s documentation.

The primary use case for transit is to encrypt data from applications while still storing that encrypted data in some primary data store. This relieves the burden of proper encryption/decryption from application developers and pushes the burden onto the operators of Vault. Operators of Vault generally include the security team at an organization, which means they can ensure that data is encrypted/decrypted properly. Additionally, since encrypt/decrypt operations must enter the audit log, any decryption event is recorded.

The objective of this article, however, is not to explain the capabilities of Vault, but rather to do an analysis of what’s the overhead of using Vault to encrypt a single field in the application.

For that purpose, a MySQL data source is used, using the traditional world database (with about 4000 rows), and the test being run will effectively launch a single thread per entry, that will encrypt a field of such entry, and then persist it to Amazon S3.

This test was run on an m4.large instance, in Amazon, running a Vault Server, with a Consul backend, a MySQL server, and the script taking the metrics, all on the same system. It is inspired on a traditional Big Data use case, where information needs to be persisted to some sort of object store for later processing. The commented Python function being executed in each thread is as follows:

This would render a single line of a CSV, per thread, that later was aggregated in order to analyze the data. The average, minimum and median values are as follows: 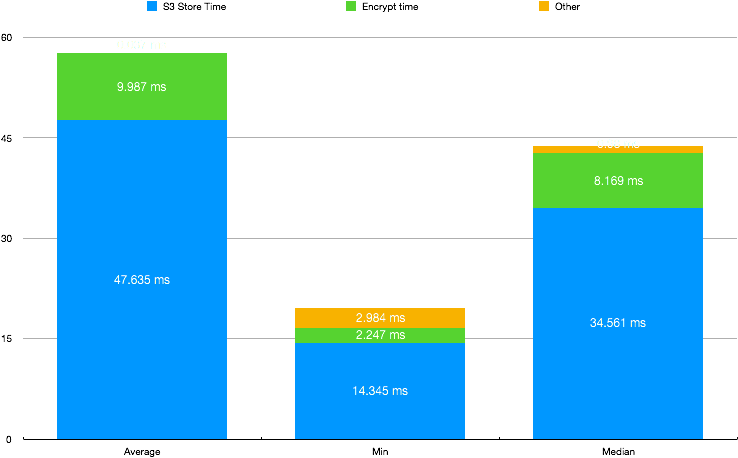 As for concurrency, this is running 4 thousand threads that are being instantiated on a for loop. According to this limited dataset (about 4000 entries) we’re looking at a 5% ~ 10% overhead, in regards to execution time.

It’s worth noting that during the tests Vault barely break a sweat, Top reported it was using 15% CPU (against 140% that Python was using). This was purposely done in a limited scale, as it wasn’t our intention to test how far could Vault go. Vault Enterprise supports Performance replication that would allow it to scale to fit the needs of even the most demanding applications. As for the development effort, the only complexity added would be adding two statements to encrypt/decrypt the data as the Python example shows. It’s worth noting that Vault supports convergent encryption, causing same encrypted values to return the same string, in case someone would require to look for indexes in WHERE clauses.

Using this pattern, along with the well known secret management features in Vault, would help mitigate against the Top 10 database attacks as documented by the British Chartered Institute for IT:

About the author: Nicolas Corrarello is the Regional Director for Solutions Engineering @ HashiCorp based out of London.